Alyssa is a coffee loving, bike riding, making machine who splits her time between Brooklyn, her home for the last 15 years and her new love, Baltimore. She studied Industrial Design at Carnegie Mellon University and has worked in many different fields over the years designing everything from medical tools to clothing.

In 2008 - Alyssa opened her storefront on ETSY. At the time, she was doing fashion design for a major New York based department store and craved a creative outlet. BROOKLYNREHAB was born out of the need to create a separate world full of fun experiments in clay, vintage styling and modern takes on souvenirs celebrating life in the outer burough. Then Brooklyn was still rough around the edges, by reputation at least, but a creative scene was brewing. The brand name BROOKLYNREHAB was an intended a play on the vintage process of repurposing, a "rehab" of sorts as well as a wink and a nod to the folks that lived there. The insiders knew Brooklyn was no longer a crime and drug ridden burough but rich with opportunity and soon would become a hip destination to rival that of Manhattan. As more tourists came across the bridge, her own take on souvenirs expanded to include pigeon feather specimens artfully presented in test tubes as well as bed bugs replicas sealed in glass vials intended as gifts for friends or more likely, foes. She readily adopted the pigeon as the unofficial NY mascot and has created her own cast of icons to represent the landmark buildings of both Manhattan and Brooklyn. These show up as objects as well as images silk screened onto glass and ceramic. Her hand-cast porcelain is equally as tongue and cheek like her tooth vessels that are glazed to replicate tooth enamel and are anatomically correct in shape but scaled up to fit in the palm of your hand. Her modern, all white porcelain birds, deers, squirrels, and mushrooms round out the menagerie and are designed to fill in the void and desire for nature that living in the city creates. 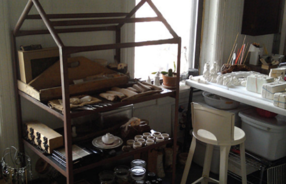 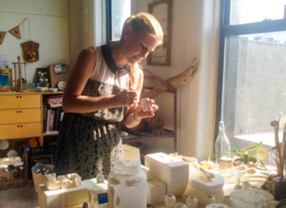 A Biography Of SORTS

By 2011 -  Alyssa had left her fashion design day job to focus on BROOKLYNREHAB full time. Her goods can be found in many independent boutiques in both NY and elsewhere, as well as in Japan and Australia. Such stores include A&G Merch, By Brooklyn, Milly & Earl, Pink Olive, Modern Love and Made with limited edition pieces previously sold at School House Electric and the Kikkerland Store. She has participated in many pop-up shows including the ground breaking AmDC group show "Design To Go" located at the New York Transit Bus Terminal. Her work has been seen in such publications as Real Simple, In Style, Good Housekeeping, Brooklyn Magazine, NY Timeout and sites such as DesignSponge, Apartment Therapy, SFByBayGirl and PoppyTalk, where she was voted 2nd place in the Favorite Housewares section by Jury Selection and 3rd place for Best Handmade Ceramics in the People's Choice Awards.

BY 2012 - After participating in several Renegade Craft Fairs, Alyssa was selected with a handful of fellow independent designers to pitch product ideas to CB2 for a chance to have limited edition pieces sold during their partnership. Alyssa designed and sold 6 unique self-produced items showcased in the Spring 2013 and Holiday 2014 catalogs. She also partnered with the Philadelphia Museum of Art to create an exclusive, limited edition line of building ornaments to reflect Philly's landmarks. She went on to participate in the Etsy partnership with the Natural History Museum in New York 2014 for launch the following Spring.

In 2015- Alyssa met and started partnering with Baltimore based furniture designer Garrett Brooks working under the business name Goodwood Design. They collaborated on a small line of handmade wooden trays and serving items. The focus is on quality materials (walnut and cherry) and fine craftsmanship. Separately, Alyssa worked with Scoutmob to extend her offerings to be included in the Brooklyn Target Stores in their effort to feature independent designers making locally relevant products.

CURRENTLY - Alyssa and Garrett are not only blending their businesses but their lives as they plan a wedding while building furniture, creating a Made In Baltimore showroom and designing commercial spaces. Alyssa goes back and forth between her old home in NY and her new love in Baltimore racking up frequent traveler miles while contemplating the differences and similarities between the two cities. She is excited to see what this cross pollination will bring to her work and her life.